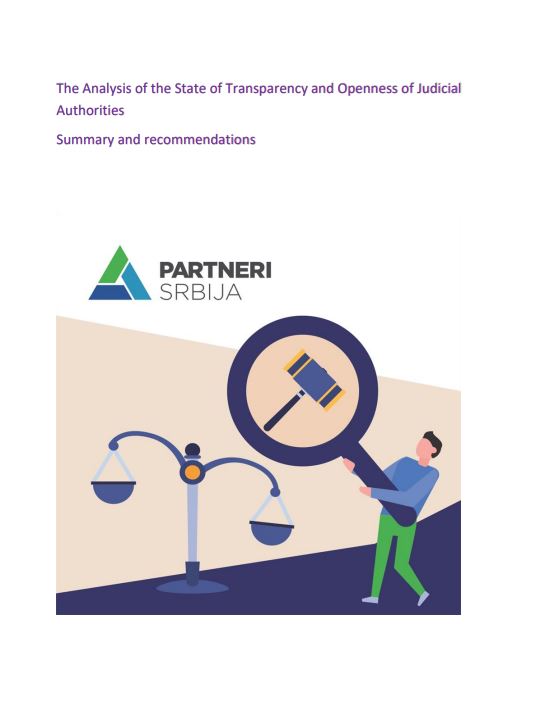 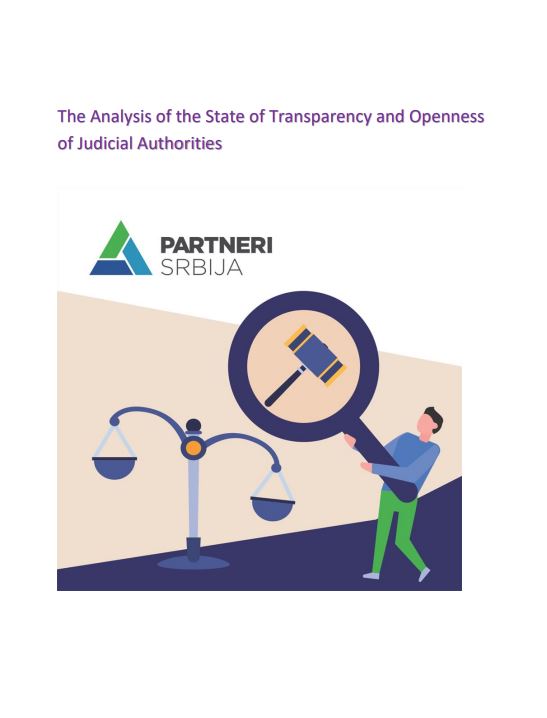 According to different surveys, Serbian citizens have had a very low level of trust in judicial authorities for years.1 The only experience most citizens have had with the judicial system is their personal participation in court proceedings that are slow, and where justice and law frequently stand on the opposite sides. Moreover, media reports have the greatest influence on citizens’ opinion about the judiciary. The trend of institutional silence has not bypassed judicial authorities, which has paved the way to the tabloidization of investigations and court proceedings and enabled public officials to condemn or exonerate defendants in their speeches, which has, in turn, created an impression of incompetence and incapability of judicial authorities in the general public. Greater judicial transparency is a prerequisite for greater citizens' trust in the judiciary, as well as for greater independence of judicial authorities. In order for the judiciary to get closer to citizens, its rapprochement with the society calls for the opening of the judiciary towards citizens and learning how to communicate with them. Of course, rather than exposing court proceedings to additional tabloidization, judiciary should be helped to get closer to citizens. It is well known that full transparency is not possible, primarily because of the need to protect the effectiveness of investigations and interests of the involved; however, a better understanding of the way in which the judiciary functions would help to increase citizens' trust. The role of the media is to contribute to this by reporting truthfully and professionally, although this is not all. In their stories and investigations, media, and primarily investigative reporters, frequently reveal different corruption and fraud cases, which should ideally facilitate the work of prosecutors. Media also play an important role when it comes to the improvement of judicial independence and protection of individuals within the judicial system. The public represents the only barrier from pressure by other branches of power, while media provide a platform through which the voice of the judiciary can be heard. 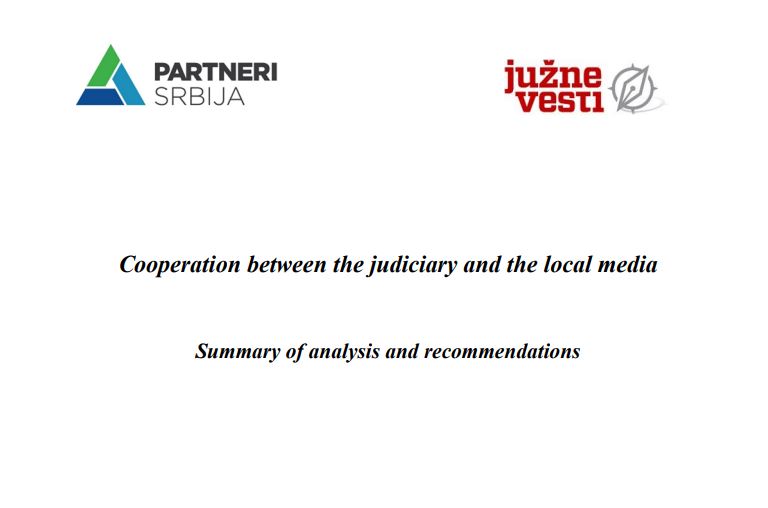 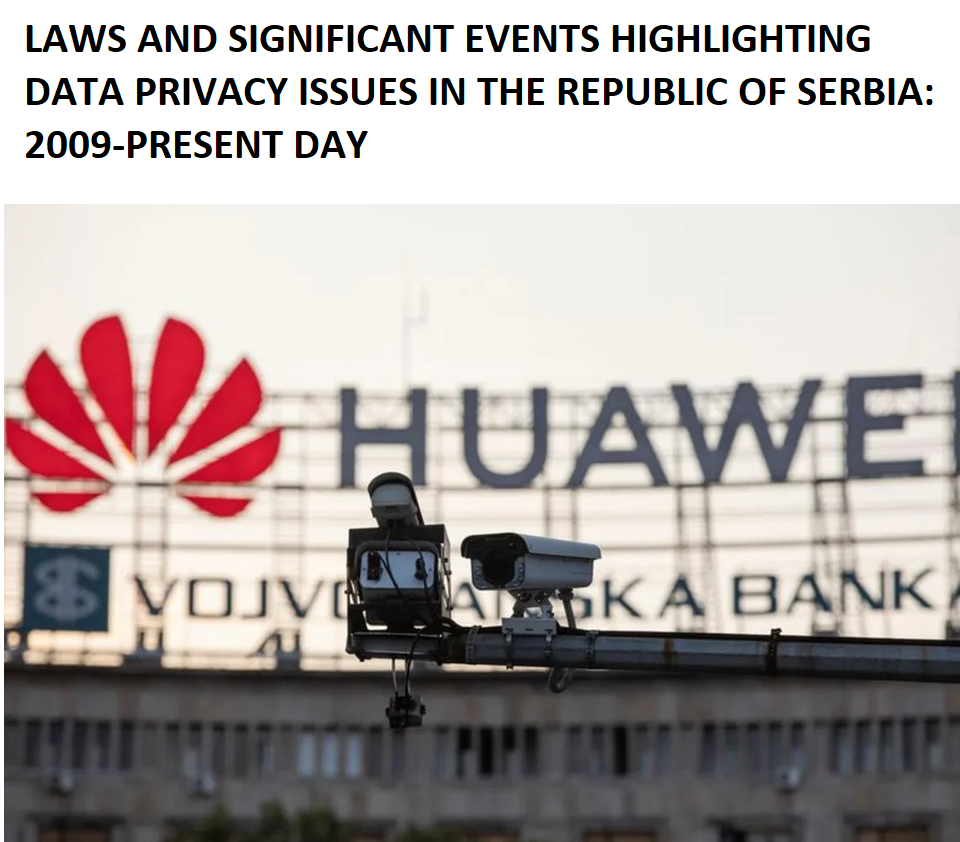 The right to privacy and protection of personal data in Serbia has never been highly regarded on the scale of human rights. The development and extensive use of new technologies have brought new risks to these rights, and Serbian citizens face a series of initiatives and projects by public authorities that greatly invade their privacy. An additional problem represents the inefficiency of mechanisms for protection of these rights and the abandonment of adequate control in the development and application of these initiatives. In order to inform citizens about existing initiatives and events relevant to the right to privacy in our country, Partners Serbia has drafted a presentation outlining the chronology of the most important events in this area. The presentation will be updated regularly to take into account all relevant events and facts. 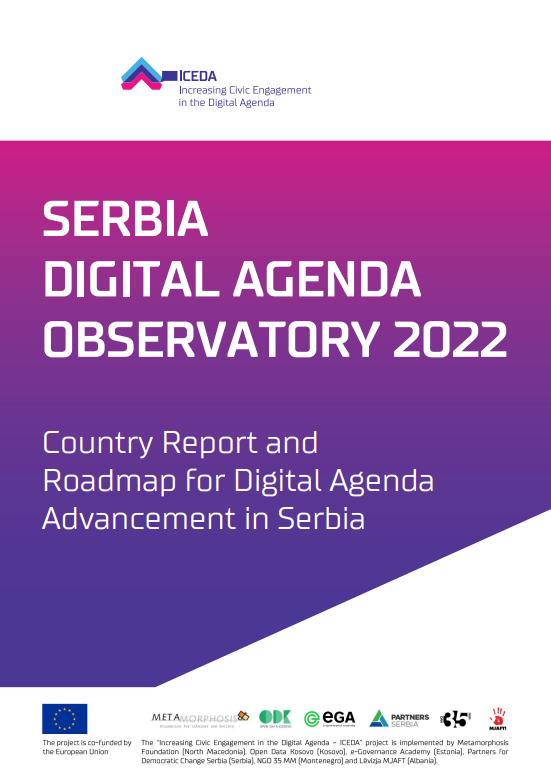 The global pandemic caused by COVID-19 accelerated the shift to all things digital with lightning speed. E-government services were not an exception to that. In the previous 2 years there was a 31% increase in the number of registered users of the e-Uprava portal of the Republic of Serbia. There were a little over 5 million payment slips created via “Plati” e-service, proving its relevance for the citizens. As a direct consequence of the COVID-19 pandemic, there were 1,465,357 digital green certificates issued. These are very good results, however there is still significant room for improvement, especially in areas of improving user-centricity and product- and project-management. Insights gained through the research for the report, as well as certain official benchmarks indicate this. For example, certain indicators from the Action plan for implementation of the Development program of e-Government 2019-22 did not meet its targets yet1 . User-centricity and more widespread usage of e-services must be at the forefront of focus in both short- and long-term activities of all relevant stakeholders of Digital agenda. 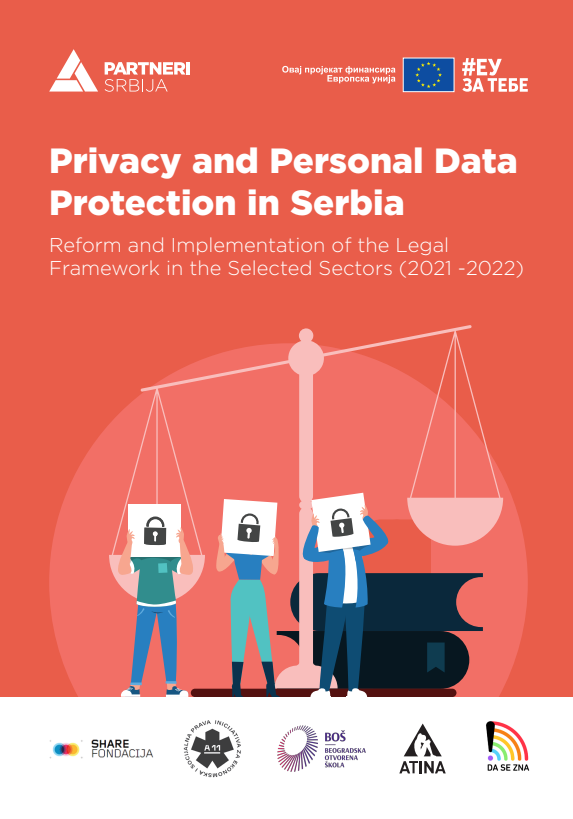 This publication was designed to highlight the current situation regarding human rights, privacy and personal data protection in selected areas during Year 2021 and 2022. The text refers to the process of adopting a Strategy on Personal Data Protection, the introduction of video surveillance with the possibility of facial recognition into the legal framework, judicial practice in personal data protection cases, the right of the child to privacy in a digital environment, and protection of personal data when applying for the workplace. The publication has no pretension to display a comprehensive state of privacy and data protection in Serbia, but only to point out certain areas, present recommendations for more appropriate treatment, and leave room for further discussion of these topics in public. 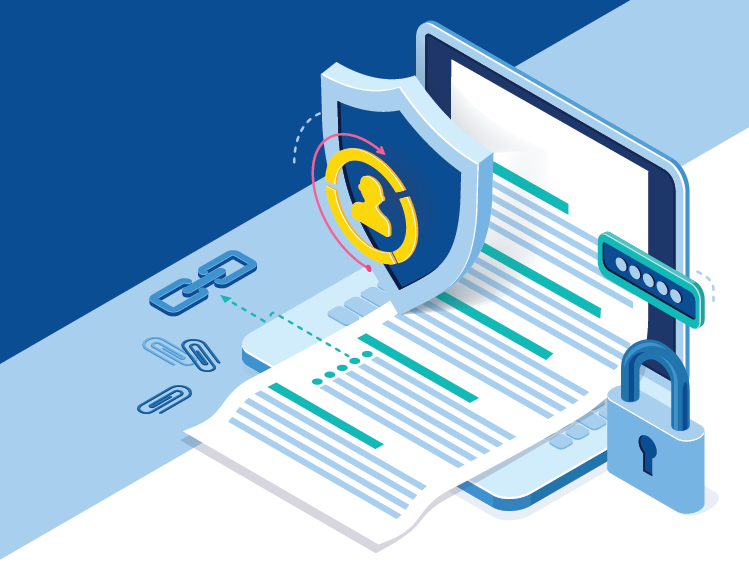 the purpose of this publication is to help understand the weaknesses of existing regulations and their implementation in specific sectoral areas and to provide recommendations on how to improve the identified situation. the selection of the relevant thematic areas reflects a high level of commitment to human rights by the organizations implementing the project, the observation of which extends beyond the right to privacy and personal data protection. We hope that, in addition to their main purpose, the presented analyses will help ensure better understanding of the importance of the right to privacy and personal data protection as preconditions for the protection of other rights and freedoms, such as freedom of expression and the right to protection from discrimination, as well as reaffirm the unbreakable ties between privacy and human dignity. 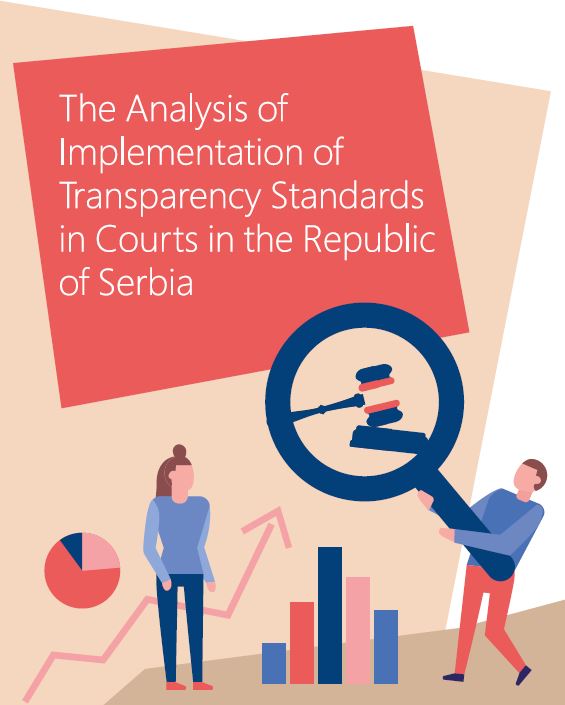 The right to free access to information of public importance is one of the most important mechanisms for controlling the work of public authority bodies. This right ensures their transparency, reduces the opportunity for corruption and protects public interests. The Constitution of the Republic of Serbia also says that public authority bodies have the obligation to ensure that their work is public and accessible to citizens. This area is more closely regulated by the Law on Free Access to Information of Public Importance. 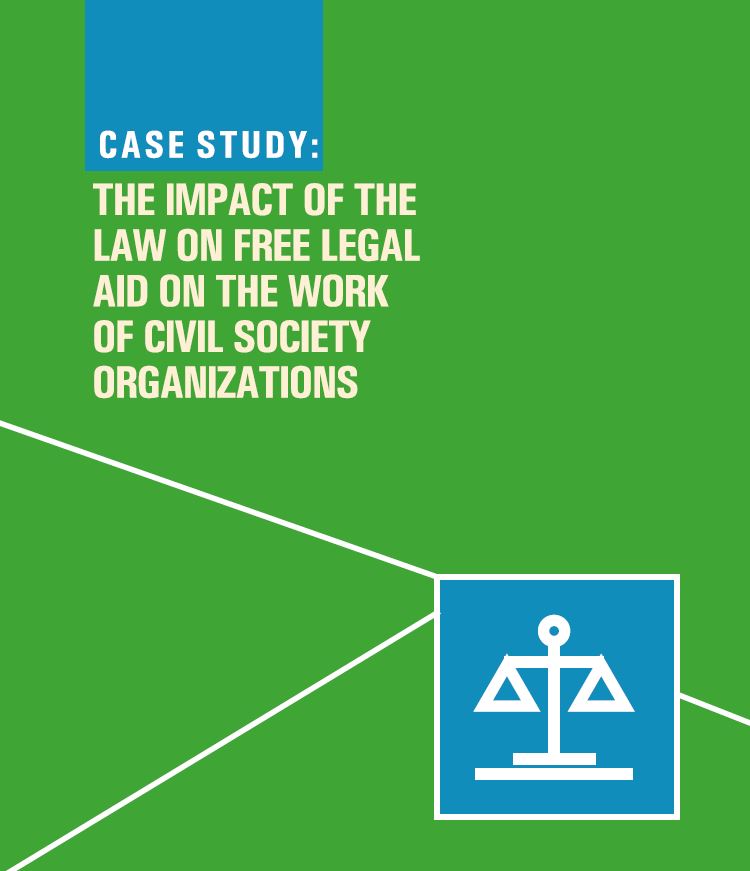 7 For many years the issue of free legal aid has been the subject of disputes between attorneys and civil society organizations. After years of debating on who, when and under which circumstances has the right to provide free legal aid, the Law on Free Legal Aid began implementing on October 1, 2019. Several provisions of the Law are quite vague, both in terms of determining who the providers of free legal aid are, as well as in determining who exactly is eligible to be the beneficiary of these services. The lack of precision in certain provisions leaves room for arbitrary interpretation. Similarly, the Law provides for restrictions directed towards associations of citizens, as providers of free legal aid, and allows them to provide free legal aid, but only in cases regarding asylum and prevention of discrimination. 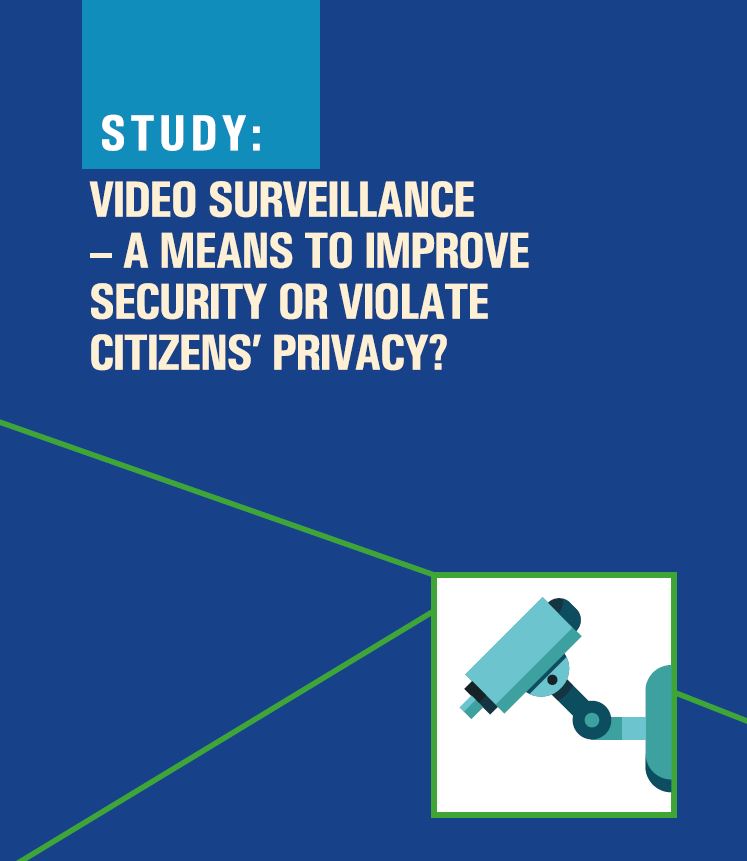 The practice of setting up and using video surveillance system in Serbia is characterized by the lack of transparency of the process itself, as well as insufficient compliance of these activities with the Law on Personal Data Protection and other regulations. The need for better regulations in the area of video surveillance arises from several examples in which such systems have been misused in Serbia. The question regarding justification for conducting video surveillance of public spaces became a hot topic in early 2019, when the representatives of the Ministry of Interior informed the public about their intentions to initiate the “Safe City” project. As it was announced at the time, the Project alluded to mass processing of personal data of Serbian citizens, by means of video surveillance equipment, which includes facial recognition software. Even today, the public still has no reliable information regarding the exact number of cameras and locations where these cameras will be placed, and there is still no expert analysis regarding the justification for introducing this kind of video surveillance system.